Epidemiologists (the people in medicine who deal with the incidence, distribution, and possible control of diseases and other factors relating to health) are the new A listers. They and their models (models are not always right) are the ones advising government on policy and I can’t think of a time, certainly in my lifetime, that their advice weighs so heavily on policies that are impacting all of us.

I listen to the news and updates on the current COVID 19 pandemic, like many other people, sometimes with irritation and frustration, when I hear complicated information being put out there to the general public by journalists who have not grasped the subject.

I know many intelligent people who struggle with an understanding of health and why they are ill and what they need to do to get better. It’s like a completely different world to them, the words, the terminology, the concepts and understanding. In the pre Covid 19 world, many people were generally too busy to sit down and take time to understand things, including health.

Maybe with lock down they’ll have the time to learn how to understand, assuming they want to. Many people are binary, they are ill, or they are not, they feel well, or they don’t. They tend to be reactive to health rather than being proactive (which takes time, understanding and change). Understanding things helps us to make better decisions, health can sometimes be complicated but a better understanding leads to better outcomes, whether it is health, business or public health information.

Over the years many people have asked me what it is I actually do. When I reflect on it, time and time again I think my job is to challenge people’s belief systems. Bar accidents and acute medical problems, many of the chronic and ongoing symptoms that patients suffer from (both physical, psychological and often a mixture of both) are generally to do with what they are doing in the environment that they are in, how they respond and the coping strategies that their bodies and minds have, to deal with their problems.

Helping them understand that and helping them change, to achieve a better balance within their physiology is often really helpful in dealing with these chronic problems. It is sometimes not easy, generally because the patient tends to hold outdated beliefs as to why they are actually ill and of course people don’t like change and are often fearful of it.

So, given the novel coronavirus, I’m not surprised that there’s even more confusion out there as well as very high levels of fear and anxiety.

So coronavirus are a group of viruses, the one we are all concerned about is SARS-CoV-2, that is what we can catch If we get the virus and the level of viral load is high, we have underlying health problems or our immune system cannot fight it, we can develop COVID 19, which is the name of the disease

One of the things causing a lot of confusion is the testing that is available what the tests actually do and how accurate they are.

I’ll do my best to make it concise:

Thanks to Penn State Eberly College of Science, Epidemiological Research Methods for the below extract

In the image below, two columns indicate the actual condition of the subjects, diseased or non-diseased. Two rows indicate the results of the test, positive or negative.

A good test will have minimal numbers in cells B and C.  Cell B identifies individuals without disease but for whom the test indicates ‘disease’. These are false positives. Cell C has the false negatives. 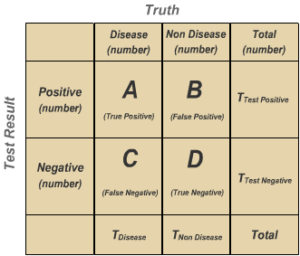 If these results are from a population-based study, prevalence (how widespread the disease is) can be calculated as follows:

Sensitivity is the probability that a test will indicate ‘disease’ among those with the disease:

Specificity is the fraction of those without disease who will have a negative test result:

Sensitivity and specificity are characteristics of the test. The population does not affect the results.

A clinician and a patient have a different question: what is the chance that a person with a positive test truly has the disease? If the subject is in the first row in the table above, what is the probability of being in cell A as compared to cell B?

A clinician calculates across the row as follows:

Positive and negative predictive values are influenced by the prevalence of disease in the population that is being tested. If we test in a high prevalence setting, it is more likely that persons who test positive truly have disease than if the test is performed in a population with low prevalence.

THAT IS THE IMPORTANT BIT.

TDL, the laboratory which I have been using for over 20 years, use several analysers when we (or the patient if they are doing a home sample) send in a Throat/Nasal SWAB sample for the test called SARS-CoV-2 RNA PCR.

Two of their analysers have sensitivity and specificity both at 100%, that’s the best you can get.

This is the test for the ANTIGEN (i.e. do you have the novel coronavirus or have you recently had it and still have a viral load, therefore potentially still infective).

TDL and many other reputable companies and governments the world over are NOT YET recommending any ANTIBODY test.

Many people simply find this hard to believe, I suspect because they don’t appreciate that the science of the test and that the epidemiology is complicated. Believe me scientists the world over have been working on this for months!

There are of course lots of companies out there offering so-called antibody test and I’m being emailed by patients for advice about using these tests and why we are not yet offering any of them.

With the prevalence of coronavirus infection running at about 5% (figures from the USA as they have carried out most antigen tests world-wide), test manufacturers and regulators alike will have to guard against false positives.

I suspect that the prevalence is probably higher and the data will no doubt emerge in due course. However, it’s the 5% prevalence that’s important for the scientists, in terms of deciding whether the antibody test is going to be accurate enough.

An antibody test recently launched in the UK, has a sensitivity and specificity both at 99%. Now that is pretty good, compared to the dodgy home test antibody kits that some people are using.

BUT, here’s the rub.

Even at 99% sensitivity and specificity, the Positive Predictive Value (PPV) is about 83.9%, assuming a population prevalence of 5%.

What does that mean?

The positive predictive value tells you how often a positive test represents a true positive.

How likely is a positive test to indicate that the person has the disease?

The Probability that disease is not present when the test is positive is 16.1%

It means that about 16% of people testing positive for COVID 19 antibodies are probably not truly positive, using a test with 99% sensitivity and specificity, assuming a population prevalence of 5%.

Extrapolate that to the UK population, assuming 5% prevalence and you get a significantly large number of people who might think they have antibodies and have some immunity, when sadly that is not the case.

It may be that 99% sensitivity and specificity is the best that it gets and if the prevalence figures are way more than 5%, then the statistical accuracy of the test gets better.

Maybe the government will need to “live” with that level of accuracy in order to get the country moving again, but the population need to understand that nothing is certain in life, science and medicine are no exception.

Below are extracts from Evaluate Vantage by Elizabeth Cairns

Dozens of antibody tests for immunity to Covid-19 have been released onto the market around the world, so far with little regulatory oversight.

The regulatory agencies have not stated what level of accuracy they might consider sufficient, and by no means all manufacturers of these antibody blood tests have released data on their products’ sensitivity and specificity. And many of the tests for which data are available might simply not be good enough – Roche’s chief executive, Severin Schwan, said that some of the tests on the market “are not worth anything, or have very little use”.

There are two major questions here. Firstly, are the claims on some of these tests to be trusted without independent verification? Reputable companies are highly unlikely to make claims they cannot justify, but many of the other antibody tests on sale around the world are from little-known groups and laboratories that might not be so scrupulous.

Secondly, how accurate do these tests need to be? Until the advent of a Covid-19 vaccine, countries aiming to lift lockdown restrictions and begin to accelerate their economic activity are going to rely heavily on antibody testing to determine which individuals can safely return to work.

So, if a test has Sensitivity and specificity of 99% and is used when the prevalence of a disease is 5%

The Probability that disease is present when the test is negative is 0.1%

The Probability that disease is not present when the test is positive is 16.1%

Many of the current antibody tests in the market have a much lower Sensitivity and specificity, so the PPV will be much lower

So, the key to a reliable COVID 19 antibody test will be one that is confirmed to have the highest sensitivity and specificity and  highest possible PPV, with the lowest risk of false positives, that governments, scientists and the public will accept.

We are now able to offer a SARS-CoV-2 Antibody test using the Abbotts Laboratory analyser through TDL. For further information please email info@thehealtheqtaion.co.uk