“Given that there are approximately 180 trials being conducted worldwide, seeking to develop a vaccine to the novel coronavirus, there seems to be very positive news regarding two or three potential vaccines which seem to be the front runners, with Oxford university/Astrazeneca and Imperial College flying the flag for the United Kingdom.

It’s good to know the scientists are focusing not just on antibody responses to the vaccine but also T-cell responses, see my previous blog regarding antibodies and what they mean and the how the immune system works.”

Hopes for a successful Covid-19 vaccine have been boosted after two leading groups achieved positive early results. In a phase-one trial involving about 1,000 British volunteers, a University of Oxford vaccine appears to have stimulated the desired response from the immune system, The Times understands. 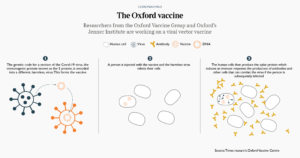 The results also indicated that another aspect of the immune system, known as T-cells, was mobilised. The researchers have yet to prove that this combined immune response is enough to protect against infection but if it had not been found it would have been a setback. “The Oxford team are very much still in the fight,” a source said.

The Lancet medical journal confirmed last night that it would be publishing early-stage human trial data from the Oxford team on Monday.

Moderna, an American biotech company, said yesterday that 45 people who had been given its candidate vaccine had displayed a “robust” immune response. An efficacy trial involving 30,000 Americans is due to begin on July 27.

A third group, Biontech, a German company in partnership with the American drugmaker Pfizer, plans to recruit 30,000 trial subjects in the US. It has two candidate vaccines that were given “fast track” status by regulators this week, allowing for quicker testing.

Moderna and Biontech are developing RNA vaccines, a technology that could allow large numbers of doses to be produced quickly but which is unproven.

The Moderna trial results, published in The New England Journal of Medicine, were greeted as “really quite good news” by Anthony Fauci, director of the US National Institute of Allergy and Infectious Diseases.

Astrazeneca, the drugmaker in a partnership with Oxford, cautioned that news on whether the university’s vaccine worked was unlikely before data was gathered from much larger trials towards the end of the year.

Matt Hancock, the health secretary, said that the teams were working towards a “best case scenario” of having a vaccine ready by the end of the year but admitted that it was more likely to be available in 2021.

“We’re all working towards the best case scenario, we’re all giving Astrazeneca and the team at Oxford, and the Imperial vaccine, every possible support, we’re working with the other potential vaccines around the world, in America, and Germany, and the Netherlands,” he told ITV’s Peston. “We’re working with them to ensure that if they come off first, that we’ll get access to them here. But this is an inexact science and it’s at risk.”

Patrik Lang, the head of equity and global strategy at Julius Baer, the private bank, said: “News on the Covid-19 vaccine development has provided a required shot in the arm to markets [and] we also see sentiment improving on consumer spending across the United States and Europe.”

Daniel Davis, a professor of immunology at the University of Manchester and the author of The Beautiful Cure, a book about the immune system, said: “If confirmed, this is genuinely thrilling news. And it is truly wonderful to see how fast this has been achieved. But of course, there’s still a long way to go. We now know that the vaccine can trigger an immune response in people. But next, we need to find out if the immune response triggered by the vaccine is powerful enough to protect us from Covid-19. It may stop symptoms or transmission and hopefully do both.”

A further 10,000 trial subjects have been recruited by the Oxford team in Britain, along with about 5,000 in Brazil and 2,000 in South Africa. A trial in the United States will involve as many as 30,000 more.

Eleanor Riley, a professor of immunology at the University of Edinburgh, was not surprised by the early findings, which tallied with those seen in previous vaccines that the same researchers had made for other diseases. “But it is good to see it, nevertheless,” she said. “The key question is, do these responses protect? Protection is not a given. We need to wait and see.”

Recent studies have shown that the antibodies that naturally occur when people catch Covid-19 can quickly fade, raising concerns that immunity could be lost in months. This could affect the success of vaccines but Sir Jeremy Farrar, director of the Wellcome Trust, said that other parts of the immune system may also be important.

“Although the antibodies may wane, we don’t know if that means that you don’t have longer lasting immunity. That is something we have to understand that has real implications for future vaccine development,” he said.

Sir Mene Pangalos, head of pharmaceutical discovery research at Astrazeneca,told the Times last week that data from the larger trials, which will show whether or not the Oxford vaccine works, would come towards the end of the year.

A team from Imperial College London is developing another RNA vaccine and is led by Robin Shattock. He said that the Moderna and Biontech results were encouraging but added: “Should either of the candidates be shown to work, the biggest challenge may be making them globally accessible where issues of dose, cost and production will be key.”

Oxford
Oxford is testing its vaccine on 11,000 volunteers in the UK and 37,000 more are being recruited in South Africa, Brazil and the US. Choosing regions where infections are rising should help show quickly whether the jab protects people.

Professor Sarah Gilbert has said that we could know whether it works by next month. AstraZeneca, who will make the vaccine, says the end of the year. Much could depend on the stance taken by UK regulators.

Oxford uses a harmless chimpanzee virus to carry part of the coronavirus genetic code into the vaccinated person’s cells. This should arm the immune system to attack the real coronavirus.

Moderna
Moderna’s vaccine has produced a “robust” immune response in a small group of people. Its goal is to have a vaccine ready by the end of the year or early next year. Stéphane Bancel, the chief executive, said that it may only reduce the risk of disease by half.

Biontech
The German company is partnering with Pfizer, the US drug company, and is developing a so-called RNA vaccine. They are potentially very easy to produce at scale. As yet, however, they are unproven and an RNA vaccine has never been licensed for use.